Before going into details about the early life and the legacy in architecture, we would like to start off by portraying the historic background of Le Corbusier.

Immediately after the first World War, Europe was going through mourning and the desire to recover, facing the destruction and working towards progression. Twenty years ahead of the war, the architecture of the belle epoque had defined the taste of the middle class, the luxury buildings, and afterward it had to face the matter of reconstruction and the conversion of the war industry. Another important matter at the time was the coverage of the housing needs exponentially with the urban population rising, a solution was required immediately.

As factories, homes, public buildings, and everything else was part of the same general structure, a new concept emerged, that of urban planning. This modern approach in architecture would offer rational solutions to complex problems such as the functionalities of the new buildings in the new cities, ensuring that those buildings would fulfill the purpose for which they are built, on the meantime occupying the respective spaces quickly and serially, to keep up with the speed of the territorial and demographic expansions. The main criteria of the whole process were to cut down on the costs without lacking the quality.

Soon after, the need to organize the architectural spaces took place as they would further need to be functional and furnished in a complementary way to meet the needs. The matters scaled from major to smaller sized ones and this is why the design was born. This series of events was followed by the architecture being declared a new science. Democratic and experimental schools were created, and the greatest talents of the period were born in Central Europe. Germans, Austrians, Belgians, Dutch, and a Swiss. 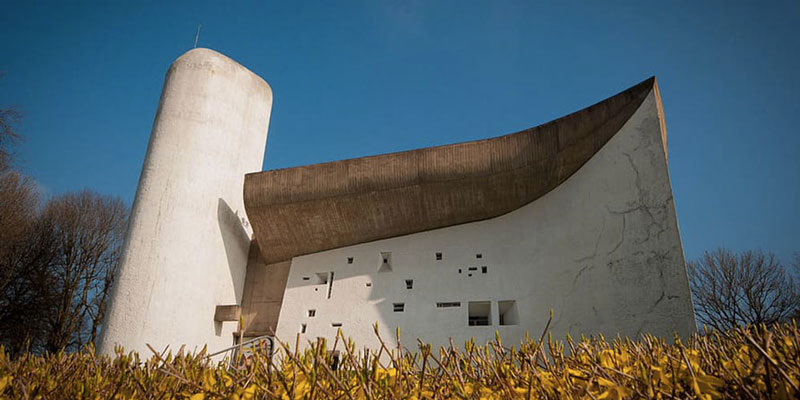 Born in the small Swiss city of La Chaux-de-Fonds, Charles-Édouard Jeanneret-Gris—better known by his pseudonym Le Corbusier is widely regarded as the most important architect of the 20th century. As a gifted architect, provocative writer, divisive urban planner, talented painter, and unparalleled polemicist, Le Corbusier was able to influence some of the world’s most powerful figures, leaving an indelible mark on architecture that can be seen in almost any city worldwide.

From a very young age, he has shown a great talent for technical drawing. At 15 he designed a pocket watch that was honored with the first prize at the Turin Exhibition of Decorative Arts. At 18 he designed his first home. In the following years, he studied architecture in various European countries. In 1908, in Paris, he collaborated with Auguste Perret, one of the first architects to make use of reinforced concrete for homes. Concrete allowed Le Corbusier to explore unusual shapes. The billowing roof of the chapel at Ronchamp, France, resembles a nun’s wimple; the studios of the Carpenter Center for Visual Arts at Harvard push out of the building like huge cellos. For the state capital of Chandigarh in India, he created a temple precinct of heroic structures that appear prehistoric.

His ideas on urban development were radical, he wanted to restructure big cities to wipe out blocks and streets, in favour of a landscape composed of large freeways linking up buildings like autonomous islands. His 1922 proposal, Ville Contemporaine, laid out a city for three million inhabitants, with buildings separated into residential, commercial, and industrial districts, with green spaces in between. While this was more of a theoretical proposal, he intended his Plan Voisin for Paris to be taken seriously. He proposed bulldozing the Right Bank in order to incorporate a toned-down version of the same layout.

The Art Deco movement was launched by the Universal Exhibition of 1925, but the design forces and luminaries initiating the mode began their work decades before. The work of Charles-Eduard Jeanneret was perhaps the earliest force launching the aesthetic.

By 1950 he had changed course, abandoning Purism, as he called it, for something more robust and sculptural. His spartan, lightweight architecture turned rustic, with heavy walls of brick and fieldstone and splashes of bright color.

In the past few years, quite e controversial polemic aroused regarding Le Corbusier. It seems that the architect’s efforts to rebuild after the massive First World War destruction totally disregarded his strong relationship with the far right. It seems that his stay in Vichy during the occupation, at the heart of the Pétain regime was forgotten. There are written evidence of his point of view: As he writes to his mother in 1940 months after the French rout by Hitler’s troops “The military defeat is a miraculous French victory in my eyes.” His private correspondence contains openly anti-Semitic statements: “Money, Jews (partly responsible), Freemasonry, all will face justice. These shameful fortresses will be dismantled. They dominated all.”

In the early months of the Nazi occupation, he wrote that: “the Jews are having a hard time,” adding that “their blind thirst for money had rotten the country” in a time when Le Corbusier took up residence in Vichy in January 1941 in his free will. The polemic deepens as the affected artistic and architecture communities are now recollecting Le Corbusier’s approach to architecture and art, this time without leaving behind the connection between them and his political point of view.

Tim Benton, who co-wrote Le Corbusier Le Grand, says that Corbusier was, especially later on in life, a “bastard in many ways. He was very severe with people, especially after the 1930s when he became a world figure, and he sometimes slapped people aside. On the other hand, people say how generous he was, and kind.” This secretly sensitive man grew up dominated by his mother, who he continued to write to on a weekly basis until she reached 100 years old. One of Corb’s first buildings was a home for his parents, but the financial burden of the house proved too much for them, and they ended up retreating to a holiday home he had built on Lake Geneva. Facts show that Le Corbusier, the most important architect of the 20th century, created this pseudonym to use it as a shield for the heavy drinker, brothel frequenter, and, in one roguish incident, thief, who tried to win a city-planning project in Berlin by breaking the rules of entrants’ anonymity.

Since his death, a number of Le Corbusier’s plans have been seen through to their tangible end, and it is still possible that some of his unrealised designs might yet be built, such as the respect for this master of modernist design. Perhaps Corb’s hypothetical city for three million inhabitants was a more achievable plan than even he could have predicted.